The Prince and the Servants

The Prince and the Servants 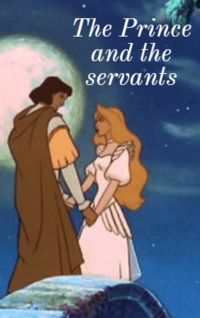 In olden times one far country was ruled by a lazy and greedy queen. She had a beautiful daughter. Many kings and princes wanted to marry her, but the queen always gave them difficult tasks.

When the suitors for the princess were unable to cope with these ordeals - she killed them without mercy. This had been going on for a few years. She wanted her daughter to never get married.

Prince Charles lived in a small poor country. When he heard about the princess, he told his father that he wanted to marry her. The king was against it. In the world there were many other beautiful women.

And the evil queen killed every groom. But the young prince got upset. He could not sleep and eat. Finally the King let him go on this dangerous mission.

THE PRINCE AND THE SERVANTS

Once there was a bad and jealous queen. She had a kind and beautiful daughter. Many princes from many countries wanted to marry the princess. The queen said to each prince, 'Before you marry my daughter, you have to do something for me.' And then she gave him an impossible job. When he couldn't do it, she said, 'Now you will die.' And her wood-cutter cut off his head.

'You will never marry,' she said to her unhappy daughter. And she laughed.

Prince Charles was the son of a poor king in a small country. He heard about the beautiful princess. He said to his father, 'I want to marry her.'

'Never!' cried the king. 'The queen will kill you. You are my only son - I cannot lose you! There are hundreds of beautiful women in the world. You don't have to marry this one.' But the prince was very sad. He couldn't eat. He couldn't sleep. In the end his father said, 'Go, then - go to the princess! I hope you will do better than the other princes. I hope I will see you again.'

The prince was very excited and he danced round his rooms. He ate a lot of food and got strong again. Then he began his journey. He had no servants because his father was poor. 'I'll find servants on the way,' he said.

After a short time, the prince saw a small mountain. 'What is that mountain?' he thought. 'It wasn't there before.'

He went nearer. It wasn't a mountain. It was a very fat man on his back, asleep. The prince went near him and the fat man woke up.

'What are you doing here, Fat Man?' asked the prince.

'Why were you asleep?'

'Because I had some food this morning. Now I want my lunch.'

'What did you eat this morning?' asked the prince.

'Will you be my servant?' asked the prince.

'Give me food,' said the Fat Man, 'and I will do anything for you.'

So the Fat Man followed the prince.

A short time later on their journey, they found another man. His head was down and his left ear was on the ground. He looked up. His left ear was very large.

'What are you doing, Big Ear?' asked the prince.

'I am listening,' said Big Ear. 'The flowers are opening. The birds are singing in a country over the sea. I can hear them.'

'What can you hear in the house of the beautiful princess?' asked the prince.

'People are crying. Another prince is dead.'

'Will you be my servant, Big Ear?'

A short time after that, they saw two long things by the road.

'What are they? Trees?' said Fat Man. They went nearer.

'They're not trees,' said Big Ear. 'They're arms. The longest arms in the world.' A little later they saw the man's head.

'You are a very long person,' said the prince.

'I can be longer than this,' said Long Arms.

'Come with me, Long Arms,' said the prince. 'Be my servant.'

So Long Arms followed the prince.

Next they saw a man with a hand over one eye.

'Is there something in your eye?' asked the prince.

'No,' said the man. 'I can see a long way. I can see through things - buildings, mountains, water. When something is near me, I have to put my hand over one eye. Then I can see it.'

They went on their journey and the sun got very hot. The prince opened his coat. They came to a man by the road. He wore two thick coats and a large hat. They could not see his face. He said, 'I am cold, cold, cold.'

'Why are you cold, Cold Man?' asked the prince. 'The sun is very hot and our coats and shirts are open. We are hot.'

'When I open my coat,' answered Cold Man, 'the sun disappears. It snows. Everything dies of cold.'

'Come with me,' said the prince, 'and be my servant. But please don't open your coat.' Cold Man went with the prince.

Prince Charles and his servants arrived at the city, and the prince went to the queen.

The queen answered, 'You will have to do three things. Do them well. Then you can marry the princess.'

'What is the first thing?' asked the prince.

'I have a beautiful blue jewel. Yesterday it fell into the river. Bring me the jewel before the sun goes down!'

The prince went back to his servants.

How can we find the jewel?' he asked them.

Quick Eyes took his hand from his eye.

Then Fat Man opened his mouth and drank the water in the river. A short time later, the river was dry. Long Arms got the jewel and gave it to the prince.

The queen was very angry when she saw the jewel. Then she said, 'Tomorrow I will give this prince a very difficult job.' She thought hard. She did not sleep that night.

The next morning the prince woke up early. He went to the queen again.

'You are hungry after your long journey,' she said, with a cold smile. 'I have thirty chickens outside. Eat them before twelve o'clock. I do not want to find one chicken leg.'

'Can I invite a friend?' the prince asked. 'I do not like eating without a friend.'

'You can ask one friend,' said the queen. The prince left. 'He will die this afternoon,' she said to her daughter. And she laughed.

The prince went back to his friends.

Fat Man quickly ate the thirty chickens. Then he ate the queen's other animals, the bread in the kitchens, the fruit on the trees and the vegetables in the ground.

'Now what can I eat?' asked Fat Man. There was nothing there so he went to sleep.

At twelve o'clock the queen called for her lunch. She waited and waited, but no food came. She went to see the cook. 'Where is my lunch?' she asked.

The queen got angrier and angrier. Then she thought of a plan. 'Ha ha!' she laughed. 'Now I will catch him.'

The prince came to her on the third day.

'Will you eat with me tonight?' she asked, with a lovely smile. 'And after that, would you like to sit with the princess for two hours?'

'Yes,' answered the prince. 'I would love that.'

'You will not fall asleep when you are talking to the princess?' asked the queen.

'When a person falls asleep with the princess,' said the queen, 'the princess disappears by magic. Then that person dies.'

The prince put on his most beautiful clothes. He ate with the queen. Their conversation was very cold. Servants brought wonderful food and wonderful drinks. When the prince turned away for a minute, the queen quickly put something into his glass of wine. The prince did not see. He drank the wine.

Then the queen took him to the princess. They climbed up many stairs to a high room. The princess sat sadly by the window. The red light of the evening sun lit up her beautiful face. The river below, the flowers round the window and her dress were the same colour.

The prince sat near the princess. They were very happy for a short time. But the prince's eyes suddenly felt heavy. He started to fall asleep. He couldn't hear the princess's words. His eyes shut. He was asleep.

Half an hour later, he opened his eyes again. The princess wasn't there! He looked everywhere in the room, but he couldn't find her! He ran to the window and looked out. He saw Big Ear below. He called to him, 'The princess isn't here. We have to find her in the next hour.' Long Arms brought the prince down to the ground.

'Where is the princess? Can you hear her, Big Ear?'

Big Ear put his ear to the ground.

'Yes,' he said. 'I can hear her. She is calling. She says that she is across the river. She is inside a tree. Her mother's men put her there.'

'But how can we get her?' cried the prince. 'I have an idea,' said Cold Man and he opened his coat. Snow fell. Everything went white. Cold Man jumped into the river and the water was ice. They ran across the ice and brought the princess back. Long Arms put the prince and princess back through the window into the high room. They sat down and the door opened. The queen came in. She could not speak when she saw the princess. She gave them a cold smile.

'We are having a very interesting conversation,' said the prince. 'We are talking about trees and rivers.'

'Come with me,' said the queen. 'It is night. Your bedroom is ready. Your servants can sleep there too.'

The prince said goodnight to the princess and he and his servants followed the queen. She took them to a big room. The queen shut the door. She ran to the cook and said, 'Make a great fire under their room.'

After a short time the room got very hot. The prince went to the door but he couldn't open it.

'I can hear a great fire below us,' said Big Ear.

'This is wonderful,' said Cold Man. 'I feel really warm for the first time in my life.'

'Open your coat, Cold Man,' said the prince. When Cold Man opened his coat, the room got colder again. 'That's better,' they said.

The queen listened at the door. She heard them. She ran to the cook and said, 'Make the fire hotter.'

Cold Man smiled. 'I am warm again,' he said.

'They are cooking us,' said the other servants.

'Take off your coat,' said the prince. The prince took Cold Man's coat away.

Snow fell in the room. The prince could not speak because he was too cold. Fat Man cried. There was ice in his hair.

The queen came to the door. She listened. Nothing.

'They are dead now,' she said. She opened the door. The prince and his servants ran out of the room.

'Let's go and sit by a fire,' said the prince. 'My face and hands are blue with cold.'

The queen could not win - she knew that now. So she left the country. The princess married the prince and they lived happily. And the good servants lived with them.