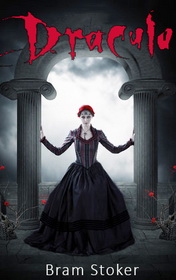 I will tell you a terrible story, which happened to me about seven years ago. I was a lawyer and lived in London, I was going to get married. I had a client from Transylvania his named Count Dracula. I helped him to buy a house in London. When I found a house he asked me to come to him for sign the papers. I didn’t want to go, but he was a rich man and would be useful for me. This journey had to be too weeks long. When I came to the inn, where a stayed, an innkeeper warned me about a castle of Count. I was surprised, but I read something in the book about Transylvania which gave me my future wife Mina. In spite of it warnings I went in carriage to the castle of my client Dracula. It was long journey because it was in high up in the Carpathian Mountains and only wolves lived there. I arrived in the castle to deep night and saw the master of this house. He was thin, pale man with red eyes and big white fangs. I felt horror.