Ali Baba and the Forty Thieves

Ali Baba and the Forty Thieves 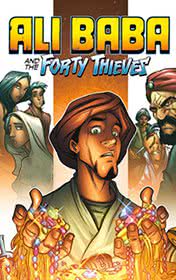 This is an Arabian folk tale, included in the "One Thousand and One Nights". One merchant had two sons. When the merchant died, the elder son got a heritage and a wealthy wife. The younger son Ali Baba got nothing and married to a poor woman. Ali Baba became a woodcutter. One day he was working in the forest, collecting the firewood. Suddenly he saw forty men in black on the black horses. They came to a huge stone and one of them said, 'Open Sesame'. Something incredible happened: the stone opened an entrance into a cave. Everybody went inside. Ali Baba did the same thing, after the men in black had left. He said the magic words, 'Open Sesame'. The stone obeyed him and he entered the cave. The woodcutter found many treasures there and decided to take something with him.